LIFE myBUILDINGisGREEN gives a conference on architectural solutions based on nature 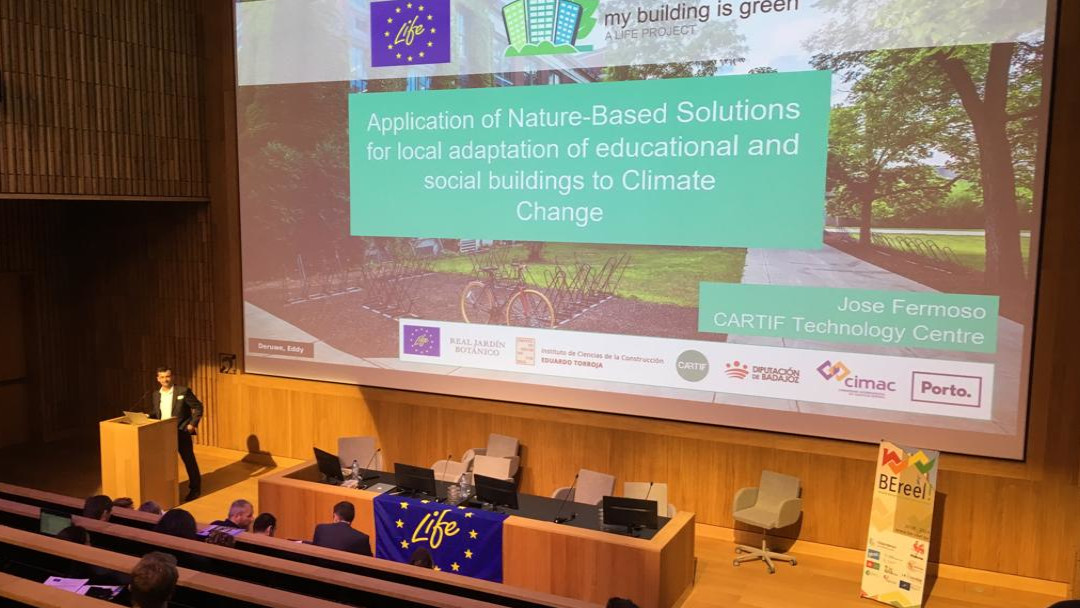 Within the framework of the LIFE myBUILDINGisGREEN project, of which CARTIF is a participating partner, the Provincial Counsil of Badajoz will give a conference on November 13 in the city of Badajoz about the impact and functionality of Nature Based Solutions (NBS) as sustainable tools for climate adaptation in buildings and cities.

The event will consist of a set of conferences grouped by thematic blocks that will deal with aspects such as the impact of climate change on public buildings, the management of housing stock, innovative technology in the field of NBS, climate adaptation measures, systems of certification and quality, etc.

The objective of this meeting is to improve the dissemination and social impact of the goals of the project: raise awareness about how Nature Based Solutions are an effective and appropriate measure of local adaptation to climate change in buildings. The main thread is climate change, its consequences – especially in terms of user comfort – and the need to adapt to it, for which the NBS is one of the best options.

The consequences of climate change on buildings directly affect the well-being of the occupants, so it is important, first, to raise awareness of this aspect (even more) to those interested. A significant presentation of authorities is expected to convey the importance of the matter and then a presentation on the aforementioned consequences of climate change, especially in building and mitigation and adaptation measures, as well as on adaptation strategies at the territorial level (Junta de Extremadura ).

The adaptation solutions must consist of almost zero energy cost solutions, and in this sense, presentations on bioclimatic architecture measures and nature-based solutions are provided, both in roofs and in facades.

Finally, the project itself, its objectives and the current development status will be announced, giving way to a round table so that all speakers can interact with the attendees, answering their questions. The event will close with a networking space mid-morning, joint participation, accompanied by a coffee.

In addition to the CARTIF Technology Centre and Provincial Counsil of Badajoz, the LIFE myBUILDINGisGREEN international project has the participation of entities such as the CSIC, PORTO and the CIMAC, all of them coordinated by the Royal Botanic Garden of Madrid. The initiative seeks to know the impact and functionality of Nature-Based Solutions (NBS) as tools for local adaptation to climate change in buildings and cities, particularly two of the most vulnerable: schools and social centers.

Climate change is currently recognized as one of the most serious environmental, social and economic challenges facing the world. Specifically, southern European regions are already experiencing a sharp increase in maximum temperatures and a decrease in rainfall. Among the current impacts of climate change we can find the episodes of heat waves, increasingly frequent and with direct effects for several sectors, including the building sector.

Within this sector, buildings destined for education and social services are highly vulnerable as a result of both the high temperatures reached between the months of May and October, as well as their construction characteristics, causing serious health problems and thermal stress for the groups that use them, that is, children, the elderly and people with disabilities.

This is, therefore, the environmental problem towards which the LIFE myBUILDINGisGREEN project is aimed, whose ultimate goal is to contribute significantly to increasing the resilience of buildings for education and social services in Europe, through the implementation of solutions based on nature as prototypes of climate adaptation and improvement of their well-being.