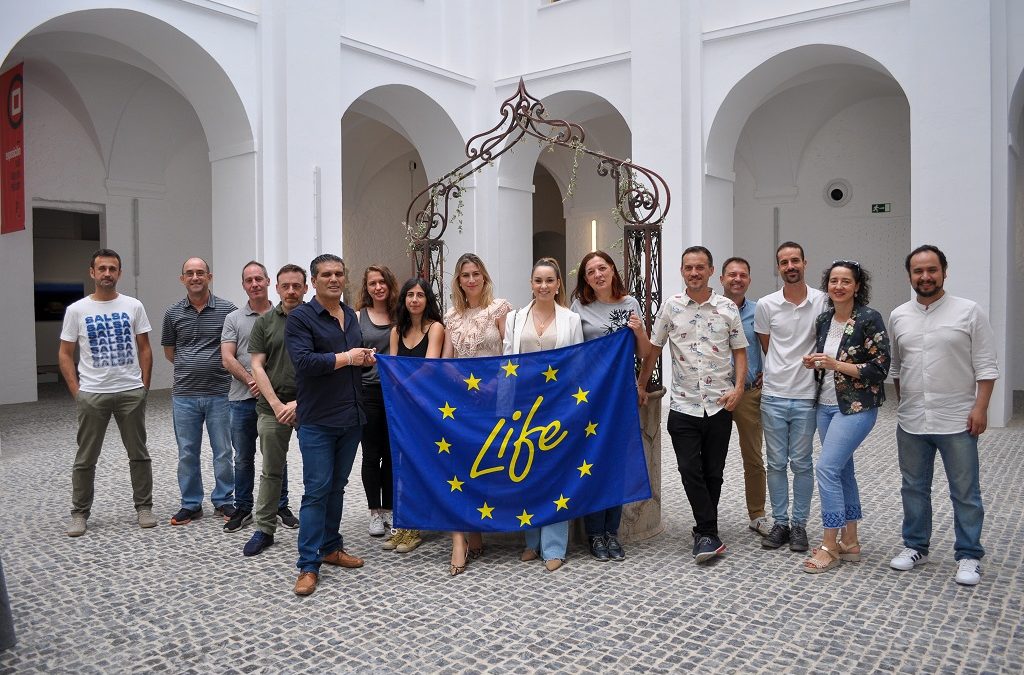 The Hispital-Vivo of Badajoz was the chosen venue of the fourth monitoring and coordination meeting of the LIFE myBUILDINGisGREEN project in a face-to-face sessions attended by partners from both Spain and Portugal.

Pilar Muñoz, head of the ODS, Parthnerships and Projects service of the Rural Development and Sustainability Area, was in charge of welcoming the rest of the partners, as well as the building itself, which was inaugurated in December.

The ultimate goal of the project is to increase climate resilience in education buildings in the province of Badajoz, Oporto and Évora through the implementation of Nature Based Solutions (NBS) as prototypes for climate adaptation and welfare improvement in buildings.

With this meeting, the project partners have been able to share the progress made since the last sessions and have established the next goals to be achieved in the next period. Once they have analysed and established the roadmap that will guide them to achieve their objectives, the consortium visited one of the Badajoz centres participating in this initiative.

CEIP Gabriela Mistral in Solana de los Barros has shown off Nature-based Solutions by demonstrating the success of the prototupes that been installed on façades, roofs and outdoor surfaces.

In addition to visiting the demonstrator, the occasion was also used to carry out monitoring and data collection work. The main objectives of the actions focus on improving the thermal comfort of the school’s students and teaching staff, increasing the green area in a sustainable way, reducing the building’s carbon footprint, water management, recovering and promoting local biodiversity un the urban environment, and raising awareness of the value of nature and the ecosystem services that are produced.

The solutions implemented included three types of green roofs with climbing plants, sedum and perennials to improve the insulation of the building envelope and reduce surface temperatures. A FAVE system with climbing plants is intended to reduce the impact of solar radiation on the building envelope and prevent the entry of direct solar radiation through the openings. Using a similar system, pergolas with climbing plants have been installed to provide shaded areas in the outdoor areas of the courtyard. Permeable paving has also been installed in an area of the courtyard and a tank to collect rainwater in order to improve its management and reduce the volume of water to be treated in the sewage system. An indoor vertical garden aims to improve indoor thermal comfort by regulating temperature and humidity levels. In total, the garden area of the centre has increased by 145.5 % from 1,049.9 m2 to 2,577.7 m2.

Thanks to the works, which were completed in December 2021, it is already possible to see how the vegetation has been opening up where it was not. As the development of the vegetation professes, the benefits will become increasingly visible, although the biodiversity impact, particularly in terms of the presence of pollinators and the reduction of the surface temperature of the building envelope, is already a fact.

The LIFE-myBUILDINGisGREEN LIFE17cca/en/00088 project is coordinated by the Consejo Superior de Investigaciones Científicas (CSIC) and co-financed by the European Union through the LIFE programme. It has a total budget of 2,854,102 euros, of which 60% is provided by the European Union and the remaining 40% by the partners. The provincial Council of Badajoz particulates with a budget of 443,593 € and its actions are aligned with the achievement of the Sustainable Development Goal of Climate Actions.