HOSPITALS OF THE FUTURE 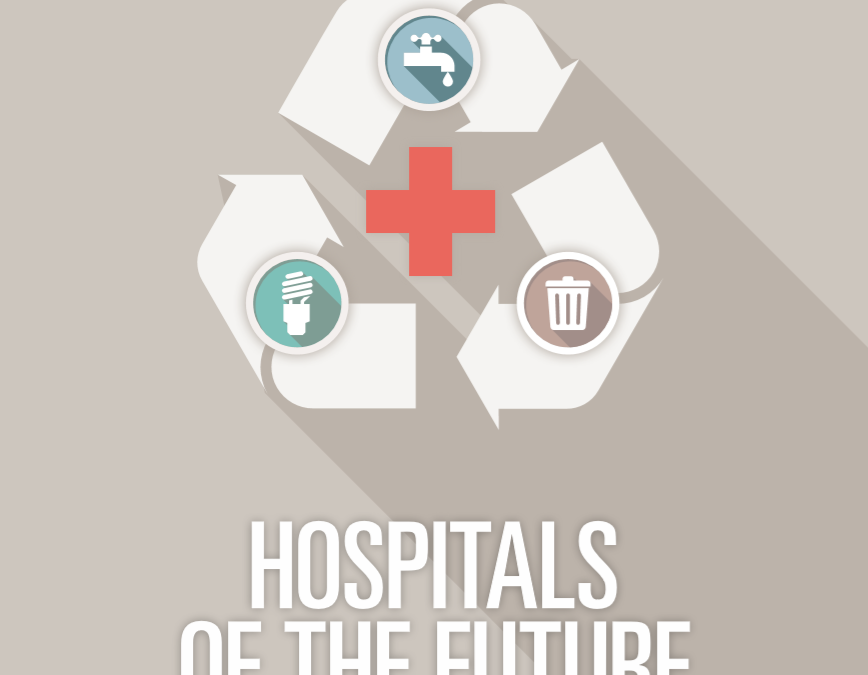 Hospitals contribute significantly to climate change owing to the natural resources and products they consume, as well as the waste generated from service deliveries. For example, the National Health Service (NHS) in England estimates its carbon footprint in more than 18 million tons of CO2 per year, meaning 25% of total emissions in the public sector1. In Spain, the specific weight of lighting in relation with the total energy use in a hospital or primary care center ranges between 20% and 30%; therefore, lighting consumption in this sector is 1000 GWh/year, representing 0,6% of national electricity consumption. This volume is responsible for the emission of about 544,200 tons of CO2 to the atmosphere every year2.

Hospital centers are the second building –right after restaurants– concerning total energy expenditure per square meter. Lighting consumption, air conditioning and heating systems, and water, have a very high general expenditure, which is eventually added to the patient’s hospital bill. In national public health systems, as is the case with Spain, this expenditure is covered by public administrations, even though it raises the price of the service provided to the user. These additional costs could have been assigned to an increase of hospital staff or funding of medicines. 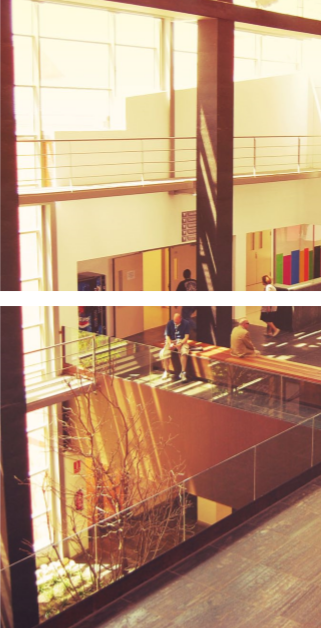 The idea is therefore to improve the efficient management of hospitals, integrating them into the smart concept along with other buildings and cities. On the basis of this innovative and necessary idea, a research team from CARTIF sought to develop a pilot project in this area; this is how LIFE Smart Hospital came about. LIFE Smart Hospital is a European project whose objective is to increase the resilience of hospitals to climate change and to reduce their ecological footprint.

An actual demonstrator was chosen to launch the project, displaying best practices and available technologies along three axes: energy, water, and waste. In this case, the University Hospital Río Hortega (HURH) of Valladolid, Spain, was the most suitable candidate for various reasons: it is one of the biggest centers in the region of Castile and Leon; it is the center of reference at regional level in the specialties of liver transplantation, peritoneal cancer surgery, and burn unit; and it has a modern infrastructure that demands higher energy consumption.

Since HURH started to operate at the beginning of 2009, they implemented various measures that allowed to reduce natural gas and electricity consumption in 30%, and water consumption in 50%. However, it got to a point where, in order to keep improving, it was necessary to adopt more complex measures considering the required investment or the technical development they entailed.

Given the hospital’s needs on the one hand and the new technological approaches on the other, it became necessary to create a consortium that provides the necessary knowledge to implement them. To accomplish this, the Packaging, Transport and Logistics Research Centre (ITENE) and the Spanish Organizational Corporation for Global Engineering (COINGES), created a partnership with CARTIF and the Regional Healthcare Administration of Castile and León.

Objectives of the project

To accomplish the Smart Hospital concept, researchers have determined to apply measures that could reduce its carbon footprint by 10% and its water footprint by 30%. These measures are structured along three axes: energy, water, and waste. 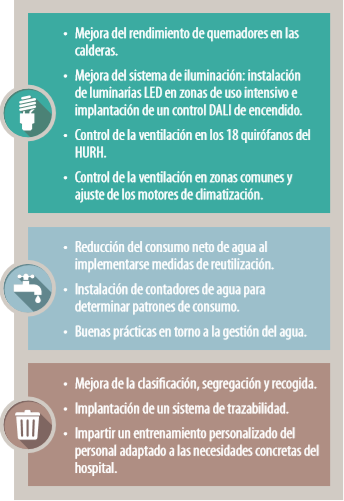 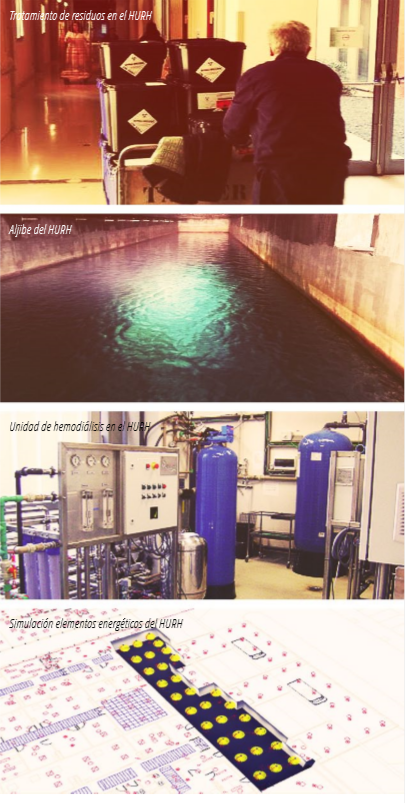 The project set a series of deadlines to apply those measures: in 2015, the installation of equipment and identified traceability systems with an investment of 630,000€; In 2016 and 2017, monitoring that equipment to estimate savings, the water footprint, and the greenhouse gas emissions; finally, developing a manual of good practices as a reference document for other hospital centers.

A year and a half since the development phase started, the project has already implemented the majority of the designed measures.

Waste control has been enhanced by implementing a new container system that improves its separation. This new distribution will allow the classification of waste in four different groups:

Besides, the actions to adapt the hospital to this new separation system have commenced: designing location maps and marking new containers; setting collection frequency; and assignment of managers.

On the other hand, improvement measures linked to waste traceability are being implemented at unit level and intermediate and final storage level.

In the first two cases, labelling of containers is being implemented, depending on the specific typology of the waste in question and its source unit. At final storage level, the actions for container weighing are being taken, including the computer record of these data.

Improvements in traceability will allow realtime recording of the quality and amount of generated waste in each section of the hospital, promoting cost optimization and resilience to potential changes during the generation of waste. 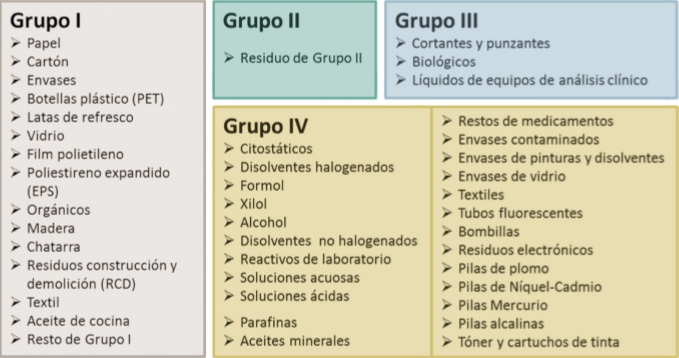 Finally, given the necessity for personnel training, a training programme has been designed to allow the engagement of employees in the project objectives. This programme will be adopted during 2016.

Actions implemented in water management include reuse measures, consumption monitoring, and personnel training in its efficient use.

In the first place, it has been considered that waste water from the hemodialysis unit should be reused. This unit has a water production plant for its use as dialysis fluid, consisting of, among others, two stages of reverse osmosis (RO) in series that provide water of excellent quality. Since January 2016, waste water from the first RO has been redirected to the general water cistern of the hospital, making it suitable for human consumption, and bringing savings of 18m3 per day.

In addition, the hospital has four coolers that work during the summer, each device with an approximate consumption of 10 m3 per hour. In this regard, the waste accumulated in the cooling pads would be collected in a pool for later reuse in the flush valves of the hospital, bringing savings of 90 m3 per day.

In parallel with the previous actions, counters have been installed to determine patterns of irrigation water consumption, cold water for human consumption, domestic hot water, flush valves, and well production. An adequate combination of data will make it possible to determine the water consumption of evaporative cooling pads, and estimate the water evaporated during the cooling process. Thanks to this measure, savings from all the actions in process will be quantifiable, allowing to establish consumption patterns. 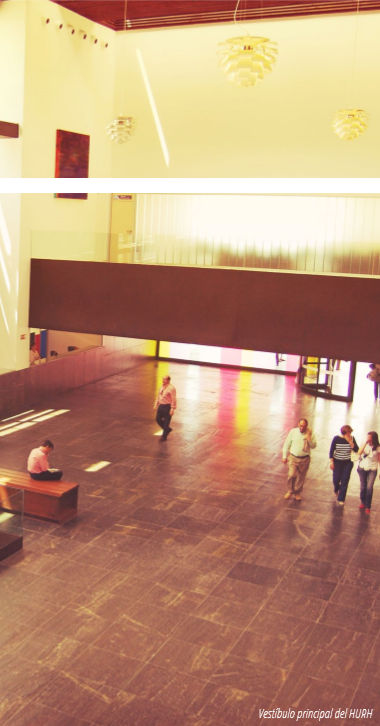 Finally, during the second semester of 2016, training would be provided to the HURH staff in different sections: general, domestic water, equipment, kitchen and cafeteria, and efficient irrigation.

Adopting all these measures, the University Hospital Río Hortega will become, in two years, the first smart hospital in Spain

To achieve a more efficient energy management, a digital control system was implemented in January 2016, intended to be used in the combustion of four boilers equipped with modulating burners that function based on thermal energy demand. This control system allows better adjustment of the air introduced through the burner in the boiler to the level required at any moment by the operating point of the burner, resulting in electric and thermal energy savings.

Besides, a lighting control system of lights has been installed in dressing rooms and the hallways of outpatient wards using DALI technology. Additionally, LED lighting has been installed there and in the emergency and labor wards, including other sections. These measures will bring LIFE Smart Hospital savings of at least 10% from previous consumption levels.

Another measure that has been implemented in the framework of the project is the optimization of ventilation in hospital operating rooms (17 units and 2 for minor surgery). According to current legislation, climate control in these spaces must be under an overpressure protection system and with filtered air ventilation levels of 20 times per hour. In the framework of the project, change of air in operating rooms when not in use has been reduced to 10 times.

Air conditioning in hallways has also been optimized. Before this project, air conditioners worked heating in the winter and cooling in the summer the air that went through them according to some procedures established in the return air. This mechanism required constant functioning of the fans in the air conditioners while they were turned on, regardless of whether heating or cooling had to be provided or not, resulting in an absolute waste of energy. Within the same project, the necessary elements to reduce the air that is supplied with a high thermal gap have been implemented, and they will probably lead to considerable savings, especially when outdoor conditions are mild, as in fall or spring.

Finally, within the energy axis, the project has replaced the oversized air-conditioning engines from HURH by more efficient equipment in accordance with real demand curves.

Adopting all these measures, the University Hospital Río Hortega will become, in two years, the first smart hospital in Spain.