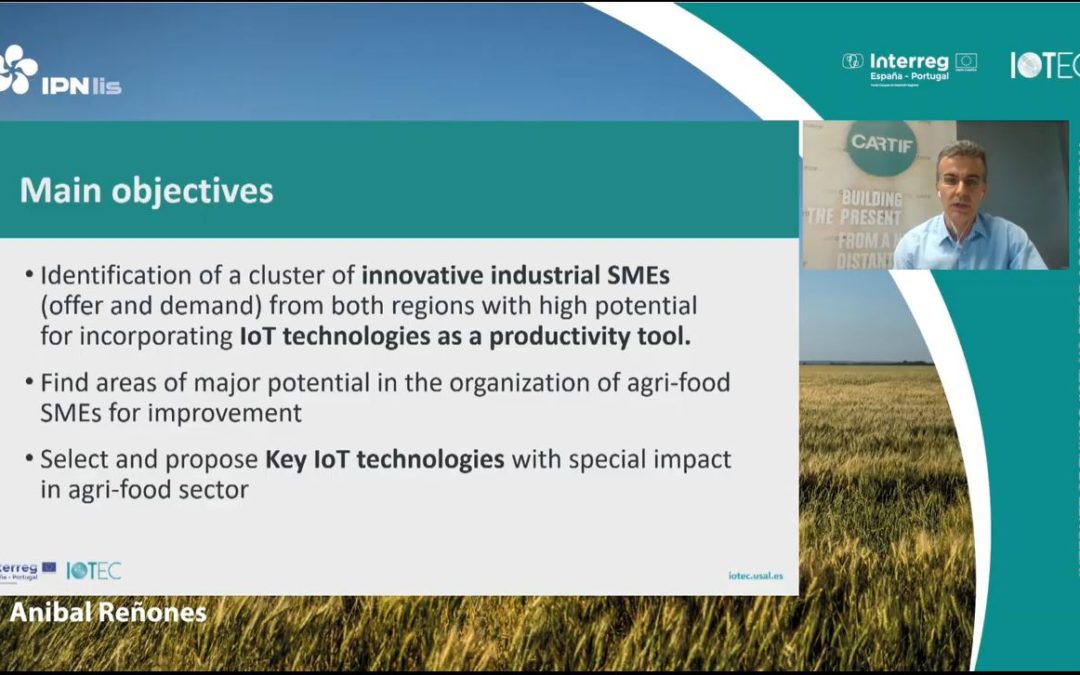 On October 21, a ‘matchmaking’ event took place within the framework of the project “IOTEC – Development of technological capacities around the industrial application of the Internet of Things (IoT)”, applied in the agro-industrial context and which had the participation of CARTIF, member of the consortium.

This online event aimed to promote the use of IoT tools by Small and Medium Enterprises (SMEs) in the agro-industrial area. In the first part of the event, the participation of experienced elements with the capacity to create added value to the sector was discussed, leading to a debate on the applicability of IoT tools and addressing the technical aspects of the use of IoT in the agro-industrial context. In the afternoon session, it was possible to witness the existing contributions in the agro-industrial area. Speakers presented some existing IoT business solutions, as well as the benefits and challenges that currently exist in this field of activity.

Likewise, with the aim of fostering alliances and identifying business opportunities for companies, pre-programmed bilateral meetings were held between companies in the agri-food sector and technology companies. Aníbal Reñones, researcher at the CARTIF Technological Centre, contributed his grain of sand to the conference with an intervention on the range of opportunities offered by IoT in the Spanish market.

CARTIF is one of numerous entities that make up the IOTEC initiative, which has as its ultimate objective the development of technological capabilities for the industrial application of the Internet of Things (IoT). IOTEC seeks to create a network of scientific and technological actors in the area of IoT between the regions of Castilla y León and Central Portugal, which allows generating knowledge in R & D & I and specialized personnel in IoT technologies, promoting their technology transfer with the focus into SMEs and create an Iberian interregional action plan in R + D + i to generate an ecosystem of work in IoT projects.

This cooperation project will work for four years to achieve the production of 30 academic works, three doctoral theses and 30 master’s theses generated by working groups and stable training programs in IoT, promote 60 regional SMEs investing in R & D & ie IoT and create a pilot work ecosystem in R + D + i of IoT technologies with all the actors involved (public administration and Spanish and Portuguese private entities), and that includes a program of dissemination and promotion on IoT in the educational field, as well as for the general public.