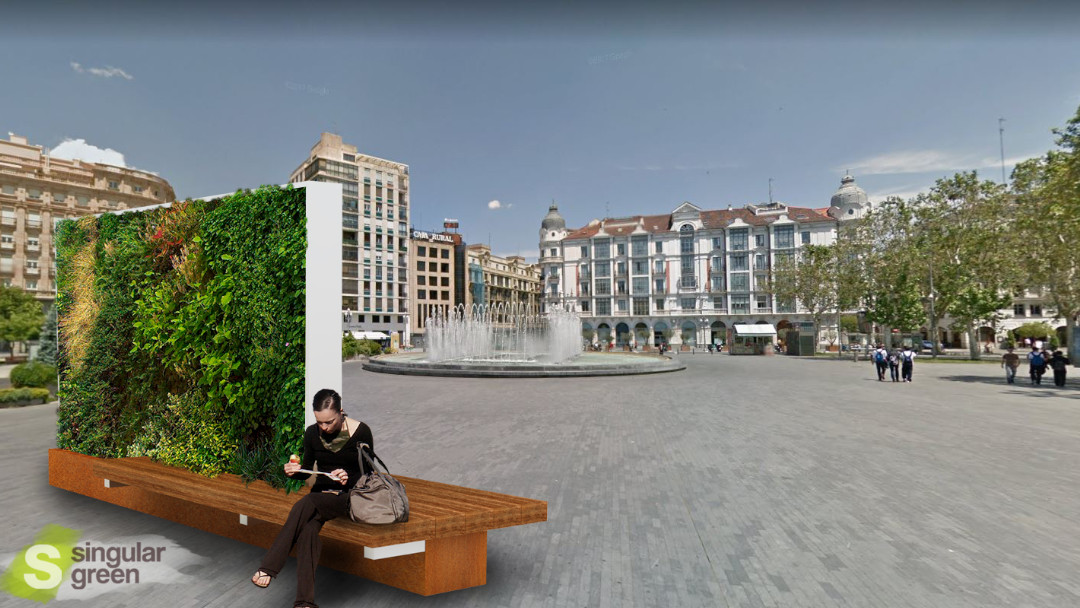 The City Council of Valladolid and the URBAN GreenUP project, coordinated by CARTIF, have approved on Wednesday the installation of several mobile gardens distributed throughout the capital city. The agreed green sites are the following: a covering of the marquee of the Plaza de España, two vertical gardens in the Plaza de la Rinconada, twelve smaller modular frames scattered around the city center and the largest of them all, located in the Plaza de Portugalete and formed by the word “Valladolid” in ‘vegetal’ letters. These new mobile gardens join the acclaimed green facade that will be installed in ‘El Corte Inglés’ of Constitution, approved last March.

The first ‘ecological’ decision of the last Governing Board before the elections has been to approve the contracting of the works to waterproof the cover of the marquee of the Plaza de España and place on it a vegetation cover with a built-in irrigation system that will work as thermal insulation. According to the Councillor for Finance and Economic Promotion, Antonio Gato, the works will involve an amount of 87,501 euros and will also repair the existing leaks. The structure of the marquee, 11.72 meters wide, will prevent the roof from being completely covered with this green carpet, which is reserved for the sides (3.65 meters on each side).

“The vegetation cover will increase the thermal insulation and, in addition, the current problem of rainwater collection will be solved, through a system of gutters (green) and downspouts, so that the water will no longer fall freely through laterals”, Gato has indicated. The intention is to award the contract this summer and the daily activity in the market can be maintained while the works are being executed.

Another important point of the meeting was the vertical garden that will be erected in the Plaza de Portugalete. «It will be formed by all the letters of Valladolid, drawn by a vegetal cover and fastened on a bench. The structure will be 12 meters long and almost 2 meters high. As it happens, for example, in Vitoria, which have a very similar, will serve as a green tourist claim and will mean a considerable sustainable asset”, said the councilman, who understands that it can become a new hallmark for the city, in a propitious enclave, next to the cathedral and La Antigua.

Likewise, Gato has declared that two more vertical gardens will be installed: one in Plaza de Zorrilla and another in Plaza de la Rinconada, and that these will integrate an innovative system of solar fans that will provide fresh air during the summer.

Finally, the Governing Board has authorized the construction of twelve modular plants of smaller size that will be installed in different areas of the center and will be part of the network of planters “in order to green the city and make it more pleasant and healthy for citizenship”, Gato concluded. In addition to these initiatives, throughout this year it is planned to tender the vegetable awnings of Santa María Street and the green cover on the roof of the Campillo market.

The City Council believe these investments will help “improve the air quality of Valladolid, reduce the effect ‘heat island’ that occurs in cities and, in addition, will be an important tourist attraction”.

The URBAN GreenUp international project, with the CARTIF Technology Centre at the forefront, has as its main objective to develop a methodology and a series of demonstration projects in the field of urban solutions based on nature and vegetation, which can contribute significantly to achieve more sustainable cities, not only from the environmental point of view but also economic and social, making them more attractive, competitive and inclusive, as well as more resilient in the face of climate change.

With the technological solutions obtained after 5 years of project development, it is expected to contribute to the mitigation and adaptation of cities to the effects of climate change: heat island effect, air pollution, flood risk, others. Valladolid is one of the three focus cities where the project is developed.