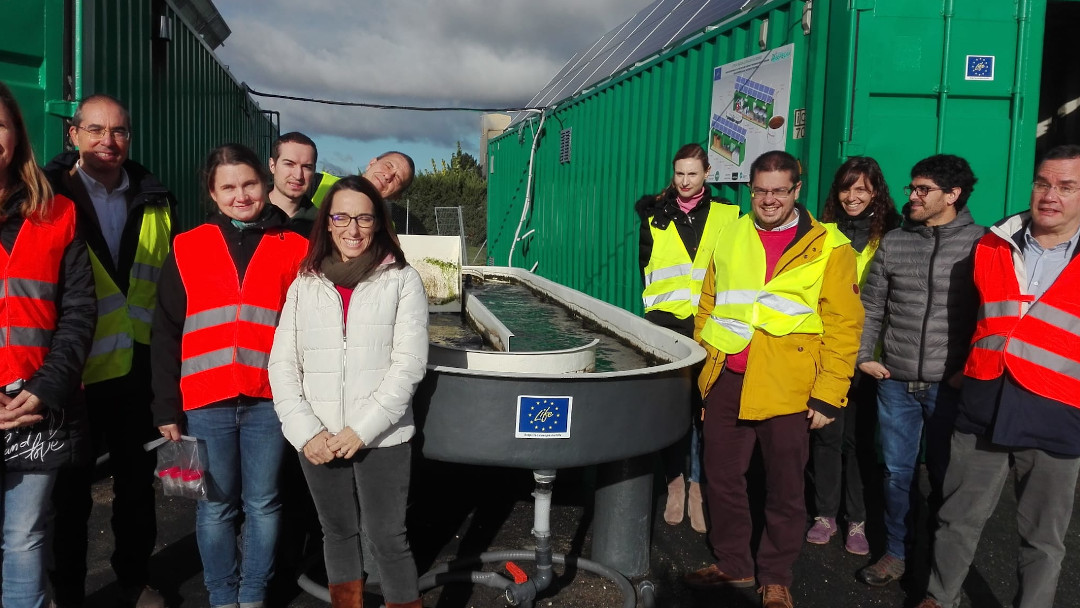 The LIFE ALGAECAN project, led by CARTIF, is successfully testing a wastewater purification system from vegetable processing that uses microalgae, a pioneering technique in Europe. This initiative is funded by the European Union through the LIFE program, the Union’s financial instrument to promote demonstration projects in the field of the environment.

On Wednesday, October 13, representatives of the European Commission visited the Huercasa plant in Sanchonuño (Segovia, Spain), where the current phase of the project is focused, to check the progress of the project.

The main objective of ALGAECAN is to reduce the environmental impact and the economic cost of the production of vegetables by treating the wastewater produced by this type of industries with heterotrophic microalgae. Heterotrophic microalgae are those that require organic compounds for nutrition and grow in the absence of light. They have great potential to remove organic carbon and various types of nitrogen and phosphorus compounds from wastewater, which use it as a source of carbon and energy without the need for sunlight.

The project started in October 2017 and is currently in the demonstration phase of the purification technology at the Huercasa facilities. It is expected that in February 2020 the demonstrator in Sanchonuño will move to Slovenia, to the facilities of the VIPI company, another of the ALGAECAN partners, to verify its operation with other types of water and in other environmental conditions.

After the first tests carried out in recent months in Huercasa, a purified water is being found that is within the legal limits of discharge, in addition to completely eliminating the sludge that is generated in the traditional process of purification of this type of water in aerobic conditions, and also obtaining microalgae as a byproduct that can be used as fertilizer or for animal feed.

The completion of the entire process in the absence of light allows working with closed tanks, which significantly reduces the space required to perform the purification, compared to other purification processes in autotrophic conditions, where large areas of land are needed for algae have the necessary light to perform water purification.

The plant prototype is also powered by renewable energy, specifically with solar energy and biomass support, with the aim of minimizing the carbon footprint and operating costs.

The ultimate goal of the project is to be able to replicate its results in other places.

The ALGAECAN project consortium is formed by the CARTIF Technology Centre (as coordinator), HUERCASA (Spain), the University of Athens (Greece), the AlgEn Technology Center (Slovenia) and VIPÎ (Slovenia).

Huercasa has been maintaining an active water policy for years, both in terms of saving and purification. In terms of purification, Huercasa has its own treatment plant in which it annually invests to practice improvements and ensure that the discharges comply with all the parameters established by law.

In addition, and for greater security, the company has been collaborating for years with the municipal wastewater treatment plant of Sanchonuño, a town where the main facilites of the company are located, to which the factory spills will stop.